As a loving, eurcharistic-centered family rooted in the Orthodox Christian Truth, we live out our faith by serving our neighbors and sharing the Gospel of Jesus Christ.

Transfiguration Greek Orthodox Church is a healthy and eucharistically-centered Orthodox Christian community, continually committing ourselves to the Christian life through repentance, catechesis, loving hospitality, and service to our neighbors. 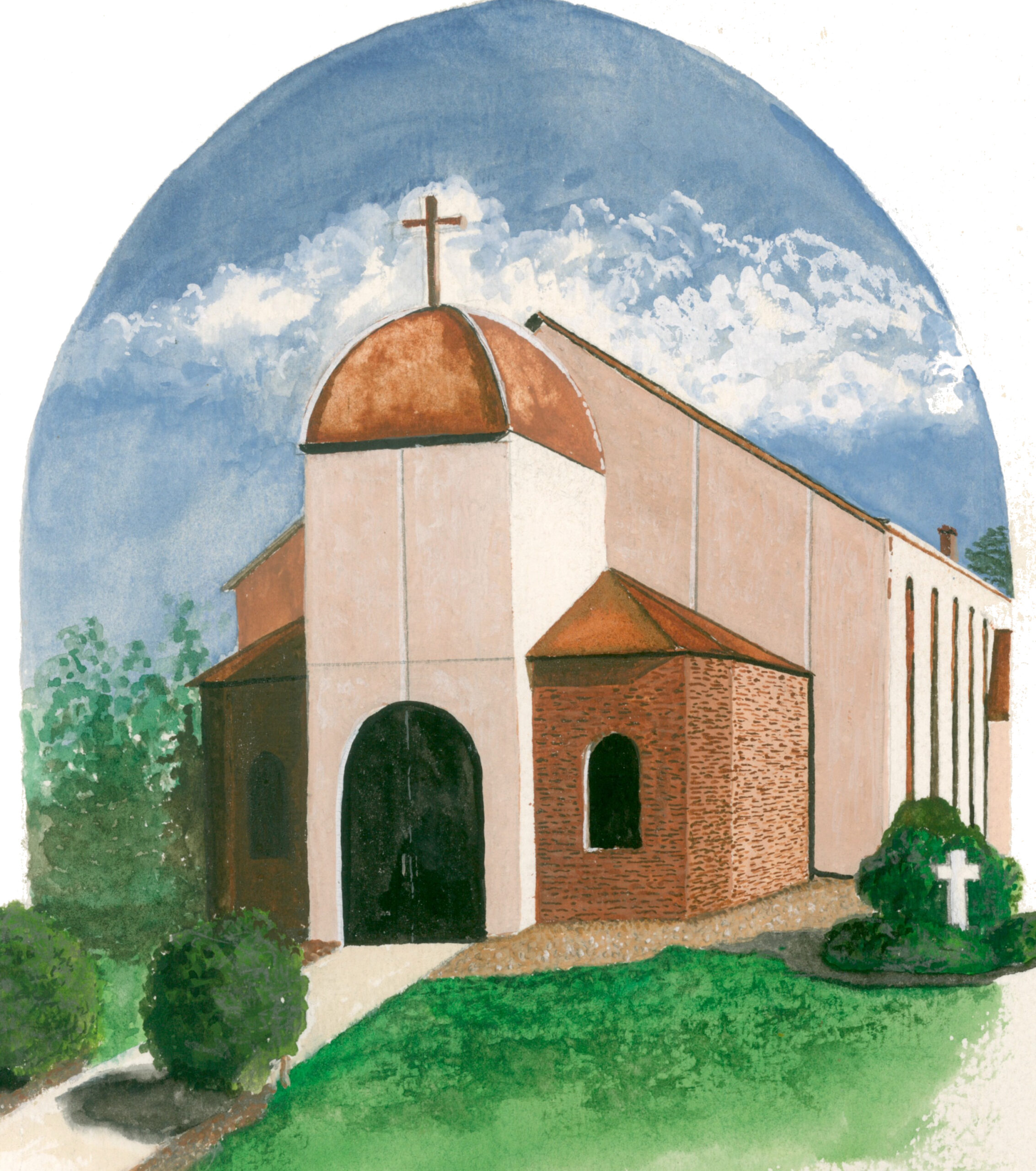 Our church was founded over fifty years ago by Greek Orthodox immigrants. Today we welcome everyone, of whatever ethnicity and religious background, who wishes to embrace and live the Orthodox Christian Faith as it has been preserved from the time of the Apostles until today.

Along with the faithful descendants of our Greek founders, our congregation today includes people from the Russian lands, as well as those of Eritrean/Ethiopian, Ukrainian, Romanian, Serbian, Armenian, Egyptian, Bulgarian, Georgian, and Syrian heritage. We also have many converts to Christian Orthodoxy from American/Western European religious traditions.

The Church is not the property of anyone nation or
ethnic group but includes all who believe rightly.
(Metropolitan Anthony, First Hierarch of
the Russian Orthodox Church Abroad)

Our liturgical language is primarily English since this is the common language that is understood and spoken by our parishioners.

We have a Sunday Church School to instruct our children in the Law of God and help them grow in the Orthodox Faith.

A lively group, Knowing and Living our Faith, meets most Wednesday evenings during the Fall and Winter months.

The Philoptochos (“love of the poor”) is one of our Church’s women’s societies. They undertake service projects for the benefit of the poor both within and outside our parish community.

Another women’s group, the Daughters of Penelope, assists the Church’s mission through fund-raising and service projects. 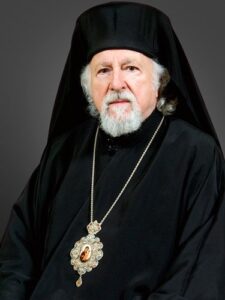 Metropolitan Isaiah is a native of New Hampshire, having been born in Portsmouth. He is one of four children born to Dennis and Mary (Kapsimalis) Chronopoulos who had emigrated to the United States from Olympia, Greece. After his primary and high school education, he served with distinction in the United States Marine Corps during the Korean conflict. In the autumn of 1954, he enrolled at Holy Cross Greek Orthodox Seminary in Brookline, Massachusetts. Upon his graduation in 1960, he attended the Ecumenical Patriarchate Seminary of Halki in Istanbul, Turkey for graduate studies. Continue reading 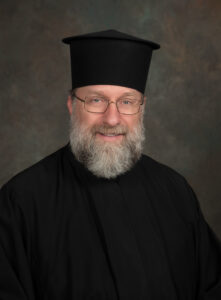 Since graduating in 1999, Father Peter has pastored three different parishes in Mississippi, Kansas, and Texas before coming to Transfiguration with Presvytera Collette and their children.

Fr. Peter Smith is a native of the central California coast, Fr. Peter Smith attended California State University at Sacramento, where he earned a Bachelor of Arts degree in Government (Political Science). It was just after graduation that he and Presvytera Collette converted to Holy Orthodoxy. After working in the insurance field for six years (during which time father was ordained as a deacon) he and Presvytera moved to the Boston area to attend Holy Cross Greek Orthodox School of Theology in Brookline, MA. During seminary, Father Peter was ordained to the priesthood (on October 4, 1998 — the commemoration of St. Hierotheos of Athens) and assisted at local parishes while completing his seminary education. Since graduating in1999, Father Peter has pastored three different parishes in Mississippi, Kansas, and Texas before coming to Transfiguration with Presvytera Collette and their children. 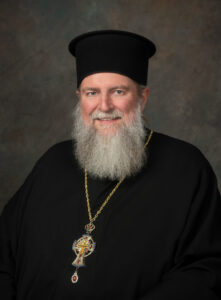 Father Sava Leida began his ministry as Proistamenos (presiding priest) of Transfiguration Church on December 1, 2008. He and Presvytera Mary came to us from St. Thomas Antiochian Orthodox Church in Sioux City, Iowa.

Father Sava Stephen Leida was born in New York City’s Borough of Manhattan during the post-WWII baby boom. He has wonderful memories of his earliest years living at the family homestead in the rural Pocono Mountains of eastern Pennsylvania. He is the older of two brothers.

The family moved west during the great “rust-belt to sun-belt” migration of the early sixties, settling in Tulsa, Oklahoma, where their father worked as an engineer and their mother as a schoolteacher.

Stephen was educated in the Tulsa public schools, then earned a bachelor of arts degree from Oklahoma State University. There he met his wife Mary, who was completing a graduate degree in biology. After their marriage, they moved to St. Paul, Minnesota, where their son and only child, Johann (Hans), was born. Stephen earned a Master of Divinity degree from Northwestern Lutheran Theological Seminary, while Mary pursued post-doctoral work at the University of Minnesota medical school. Stephen then served as pastor of a small Lutheran parish for four years.

In 1986, Stephen resigned from the Lutheran ministry and the Leida family began the process of conversion to the faith of their distant ancestors—the faith of the ancient, undivided Orthodox Catholic Church. Becoming catechumens of the Orthodox Church, they learned the Orthodox Christian faith and way of life, and were received into Orthodoxy at St Thomas Antiochian Orthodox Church in Sioux City, Iowa the following year. Dr. Mary and Stephen both worked for many years at Morningside College in Sioux City — she as a Professor of Biology, and later as an administrator, and he as a member of the Information Services department.

Stephen learned the Orthodox services by standing among the readers and chanters at St. Thomas Church. In 1994, he received the tonsure as a church Reader. He completed the St. Stephen’s Course of Studies in Orthodox Christian Theology through the Antiochian House of Studies. He was further prepared for ordination by his spiritual father and mentor, Archpriest Thomas Begley.

Stephen was ordained to the Holy Diaconate in March 2003 by His Grace Bishop Basil of Wichita, receiving the name “Sava” after Saint Sava Nemanjić, the Enlightener and first Archbishop of the Serbian Church (feast day January 14/27).

Father Sava served St. Thomas Church as a deacon for three years. He was ordained to the Holy Priesthood by Bishop Basil in 2006 and assigned as the second priest at St Thomas Church in Sioux City, serving together with another mentor and teacher, Archpriest Paul Hodge.

In December 2008, Father Sava was “loaned” to the Greek Orthodox Metropolis of Denver and appointed by His Eminence Metropolitan Isaiah to serve as the presiding Priest of Transfiguration Greek Orthodox Church in Sioux Falls, South Dakota.

On May 26, 2017, Father Sava was incardinated into the Greek Orthodox Archdiocese of America and the Holy Metropolis of Denver, and formally assigned as Proistamenos (presiding priest) of Transfiguration Church.

Presvytera Mary assists Father Sava in the parish ministry as a chanter, having retired from her position as Professor of Biology and Dean for Advising at Morningside College.

On October 7, 2018, His Eminence Metropolitan Isaiah elevated Father Sava to the offikion (honorary rank) of Protopresbyter during the Hierarchical Liturgy as we celebrated the sixtieth anniversary of the charter of our parish.

You were transfigured upon the mountain O Christ our God, showing to Your disciples Your glory as much as they could bear. Do also in us, sinners though we be, shine Your everlasting Light. At the intercessions of the Theotokos, O Giver of Light, glory to You.

Hymn For The Transfiguration

What does transfiguration mean?

He opened their eyes so that instead of being blind they could see. While He Himself remained the same, they could now see Him as other than He had appeared to them formerly. For He is ‘the true light’ (Jn 1:9), the beauty of divine glory, and He shone forth like the sun—though this image is imperfect, since what is uncreated cannot be imaged in creation without some diminution.

Sermons on the Transfiguration 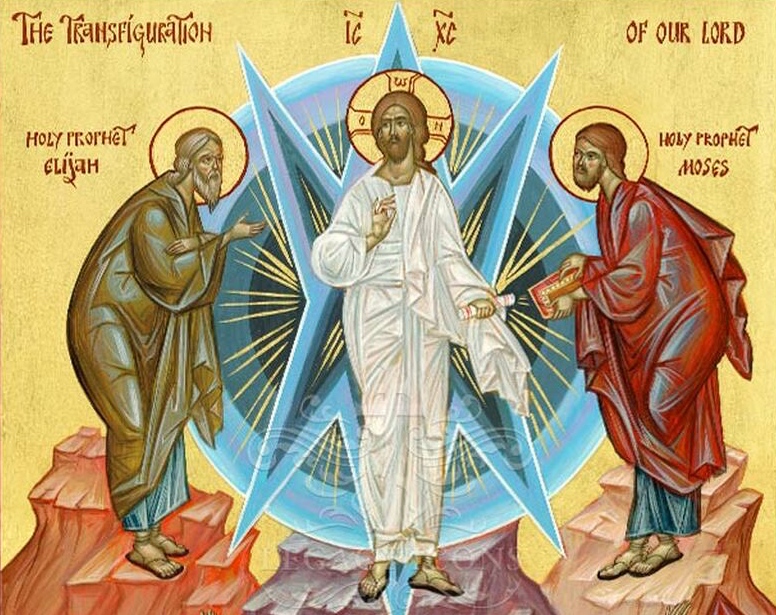 Sunday: Orthros (Matins – Morning Prayers) 9 AM; Divine Liturgy (Mass) 10 AM
Wednesday: Mid-week Prayers at 6 PM, followed by a time of learning and fellowship.
(Learning & fellowship runs from September through May. We take a break in the summer.)
Saturday: Great Vespers (Evening Prayers) at 5 PM
Confessions are heard after Great Vespers on Saturdays and by special appointment.

Please consult our online parish calendar to see when services are scheduled.

A word about the church calendar